March 27 (UPI) — Western countries denounced the detention of up to 600 people who took part in a Moscow anti-corruption rally police said drew 8,000 people.

Opposition leader Alexei Navalny was among those detained. Vladimir Chernikov, chief of the Moscow government’s Regional Security Department, announced the arrest figure, saying the exact number “is yet to be determined,” RT reported Monday. The nationwide protest came after Navalny’s accusations of government corruption, with smaller demonstrations in St. Petersburg, Vladivostok, Novosibirsk and other cities across Russia.

A European Union spokesman condemned the actions of Moscow police Sunday, saying the detentions “prevented the exercise of basic freedoms of expression, association and peaceful assembly, which are fundamental rights enshrined in the Russian constitution.”

U.S. State Department spokesman Mark Toner, in a statement, said, “The Russian people, like people everywhere, deserve a government that supports an open marketplace of ideas, transparent and accountable governance, equal treatment under the law, and the ability to exercise their rights without fear of retribution.”

Russian presidential spokesman Dmitry Peskov said that while the Kremlin respects the rights of citizens to take part in demonstrations, but they must do so in accordance with the law.

The Moscow business newspaper Vedomosti said younger Russians have become politicized and have a high level of distrust of authority. 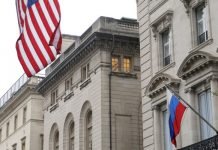