BRUSSELS, Sept. 30 (UPI) — The European Defence Agency is encouraging European countries and their armed forces to use more renewable energy to help transition the continent to a low-carbon economy.

Calling the environmental factors increasingly “hard to overlook,” the EDA says it would be better for the armed forces in Europe to adopt more sustainable practices. This includes deploying troops to low-footprint and low-energy camps, and developing energy-efficient operating bases. In turn, defense contractors are also encouraged to develop “truly sustainable military equipment,” according to a report by Defense News.

The news comes as the EDA’s “Go Green” pilot project comes to a close. The EDA signed an agreement with European energy consortium Gamma Solutionsin January 2015 to install and operate a solar facility for an air base in Cyprus, aiming to provide clean energy to the military site for 20 years.

“It marks the beginning of a journey that will see increased use of renewable energy by the military, with a long-term objective of reducing fossil fuels dependency by as much as 80 percent by 2050,” said Tom Bennington, co-chair of the Project’s Management Group at EDA in a statement at the time.

European leaders have been pushing for more environmental awareness. German Chancellor Angela Merkel joined French President François Hollande to issue a joint statement at the annual Petersberg Climate Dialogue in Berlin in May 2015, which represented 35 nations.

“We will announce at the conference in Paris that the global long-term goal is a reduction of at least 60 percent (of) greenhouse gases compared to 2010. That would mean a global reduction of 50 percent compared to 1990. Yes, it is very ambitious. But we believe if we join forces we will be able to manage that,” Merkel said in the joint statement.

Political leaders will unveil more detailed plans on combating climate change during the U.N. Climate Summit in Paris in November. 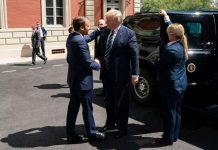