July 17 (UPI) — Four people have died after an argument led to a shooting at an apartment complex in Houston, law enforcement officials said Sunday.

Harris County Sheriff Ed Gonzalez said in a statement to Twitter that deputies responded to a building at the Cyprus Ridge complex on Bemmelwood Drive around 11:20 p.m. and found four people with gunshot wounds.

Three of the people were declared dead at the scene and the fourth was transported to a local hospital in critical condition and later died of his injuries.

“Deputies spoke with several witnesses who reported seeing several males, including the victims, shooting at each other after an argument,” the sheriff’s office said in a news release.

However, the sheriff’s office said that no motive or suspect information has been determined and that investigators are seeking people with information to come forward.

The identities of the victims have not been released but Gonzalez said that all were Hispanic males, two of whom were 16 years old. The other two victims were 19 and 25. 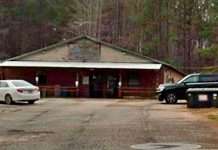