Feb. 18 (UPI) — Four Israeli soldiers were wounded when a device exploded Saturday at the southern Gaza border in an attack that was quickly retaliated by Israeli forces.

Palestinian groups in Gaza hailed the attack on Israel as “heroic,” vowing not to remain idle in the face of Israeli “aggression.”

The attack occurred as Israeli soldiers noticed a Palestinian flag hung near the border fence. As they approached the area the device exploded, according to the Israel Defense Forces.

The four soldiers were taken to the hospital with burns and injures from shrapnel, two in serious condition.

After sirens sounded in several Israeli communities, a rocket fired from the Strip hit the roof of a house in an Israeli town. No injuries were reported.

Shortly after the attack on the soldiers, the IDF fired a tank shell at an observation post that was reported to belong to the Palestinian Islamic Jihad. Later in the day, the IDF forces struck six Hamas targets in Gaza in a “large-scale attack,” which included a tunnel that stretched from Gaza into Israeli territory and two military compounds.

Jonathan Conricus, spokesman for the IDF tweeted a map with locations of targets struck in the retaliation attack.

‏These are the military targets the IDF struck this evening in response to the IED attack that wounded 4 IDF soldiers along the fence in southern #Gazapic.twitter.com/yP7AfrX6TA

Spokesman for the Palestinian Ministry of Health in the Gaza Strip said two people were sent to the hospital with moderate injuries after the attacks.

Hamas said it “holds Israel responsible for any escalation in the Gaza Strip.”

Tensions between Palestinians and Israelis have been high since December, after U.S. President Donald Trump recognized Jerusalem as the capital of Israel. 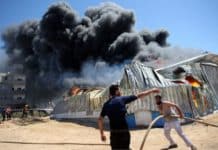 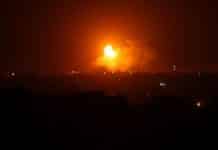