The Marion County, Ind., Sheriff’s Office said Sharp, 49, was found unresponsive Saturday evening. No foul play was suspected, though investigations by the city’s police, and the country sheriff and coroner were launched.

Sharp, who was the 2009 USA Olympic Committee Gymnastics Coach of the Year and who coached Bridget Sloan and Samantha Peszek of the 2008 U.S. Olympic women’s gymnastics team, was arrested in August on four counts of child molestation and four counts of sexual misconduct with a minor, all felonies. He also faced federal charges.

The alleged incidents occurred between May 2013 and May 2015, with some victims under 14 years old, the county sheriff’s office said.

Court documents say Sharp kept thousands of sexually explicit photographs of minors, both boys and girls, in a safe at home and in a file cabinet at his Indianapolis gymnastics school. He also was accused of inappropriately touching several female students.

At the time of the arrest, USA Gymnastics, the national organizing body for the sport, said it was cooperating fully with the investigation. 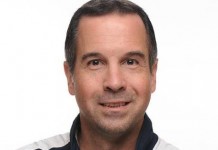