June 4 (UPI) — The House approved a $19.1 billion disaster aid bill on Monday after multiple efforts by Republicans to block it.

The bill, which provides approximately $1.4 billion in disaster relief funds for Puerto Rico, including $600 million in assistance for nutrition, farmers and rural communities as well as repairs for health care systems and federal facilities, passed by a 354-58 vote.

All of the votes in opposition were cast by Republicans.

“While it has taken far too long, this $19.1 billion bill includes a broad array of measures to help meet the urgent needs of disaster-stricken communities, from health care and nutritional assistance to social services and infrastructure repairs,” House appropriations committee Chairwoman Nita Lowey, D-N.Y., said.

The bill had previously passed through the Senate and will now be sent to President Donald Trump for approval.

Rep. John Rose, R-Tenn., and Rep. Thomas Massie, R-Ky., had voiced opposition to the bill’s immediate passage and it was first blocked on May 24, by Rep. Chip Roy, R-Texas, on the grounds that it did not contain additional funds for U.S.-Mexico border security.

“I am pleased that we have finally rejected the political stunts and grandstanding that have made it difficult to deliver much-needed relief to Americans struck by recent natural disasters,” said Lowey. 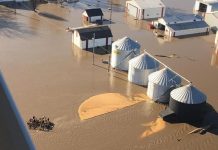