Jan. 25 (UPI) — President Donald Trump’s legal team spent about 2 hours Saturday making their opening arguments in him impeachment trial, declaring his innocence and accusing Democrats of trying to overturn the 2016 — and 2020 — election.

“The president did absolutely nothing wrong,” Cipollone said at the beginning of his remarks.

He accused Democrats of trying to reverse the results of the 2016 presidential election with the removal of Trump. Doing so would also alter the outcome of the 2020 election, he added.

“They’re asking you not only to overturn the results of the last election, but as I have said before they’re asking you to remove President Trump in the ballot in an election that’s occurring in approximately nine months,” Cipollone said.

“They’re asking you to tear up all of the ballots across the country on your own initiative. Take that decision away from the American people.”

Speaking during the trial, Purpura called into question the two witnesses who expressed concern about the July 25 call in which Trump asked Ukrainian President Volodymyr Zelenksy to investigate the Bidens. He said Trump is responsible for foreign policy, not Lt. Col. Alexander Vindman who said Trump undermined national security during his testimony before House committees.

“Other witnesses were on the July 25 call and had very different reactions than that of Lieutenant Colonel Vindman,” Purpura said.

He also called into question whether Zelensky believed he was being pressured to investigate the Bidens.

Meanwhile, Sekulow said the withholding of military aid to Ukraine was an example of a common tactic frequently used by the government.

Saturday’s proceedings were much briefing than other days of the trial.

Trump faces two articles of impeachment, with House Democrats accusing him of abuse of power and obstruction of Congress. They say he acted improperly when he asked Ukraine’s president to investigate Joe Biden — Trump’s rival in the 2020 presidential election — and the former vice president’s son, Hunter Biden.

Trump accused Joe Biden of improperly calling on Ukraine’s then-prosecutor general, Viktor Shokin, to be ousted. Shokin had investigated Burisma, an energy company on which Hunter Biden sat on the board.

Shokin’s successor, Prosecutor General Yuriy Lutsenko told Bloomberg in May that the investigation into the company began before Hunter Biden joined the board, and he wasn’t specifically a target of the probe.

Trump’s legal team, though, is expected to use some of its time in the impeachment trial laying out the case against the Bidens.

The Washington Post reported that Trump’s team believes that if they can make a case for the need to investigate the Bidens, there was a need to ask Ukraine to do it.

Trump’s team will continue their opening remarks Monday and Tuesday before the questioning stage begins mid-next week. After that, the off-ramp stage will consider motions, including any by the White House to dismiss the case and those to include witnesses. 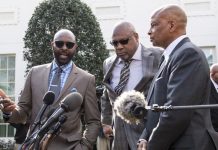