June 18 (UPI) — Conservative candidate Ivan Duque is projected to win the Colombian presidential race with approximately 54 percent of the vote, according to the country’s National Registry of Civil Status.

Duque will beat former mayor of Bogota Gustavo Petro, a leftist and former FARC guerilla who got about 41 percent of the vote, according to numbers released on Sunday.

“With humility and honor I want to tell the people of Colombia that I will give all my energy to unite our country,” Duque, 41, said in a tweet Sunday night. “No more divisions. We want a country with everyone and for everyone.”

Duque, an economist and former senator, ran on a platform that was highly critical of the peace deal the Colombian government made with FARC in 2016 and promised to enforce tougher punishment on the guerilla group if elected.

His election now puts in doubt the survival of the peace deal, which was rejected by the public in a 2016 referendum but imposed afterward by the Colombian government.

Speaking to supporters after his presumed victory, Duque attempted to assuage concerns conflicts could be renewed in Colombia.

“I will not govern with hatred,” he said. 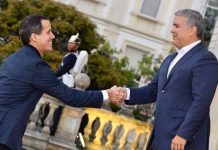