Aug. 6 (UPI) — Japan on Thursday commemorated the 75th anniversary of the atomic bombing at Hiroshima with a smaller ceremony, due to the COVID-19 pandemic.

Fewer than 800 people took part in the main ceremony at Hiroshima Peace Memorial Park to mark the moment U.S. forces dropped the first nuclear weapon during World War II. In the past, about 50,000 have attended the annual event.

Attendees on Thursday participated in a moment of silence at the precise time the bomb was dropped in 1945.

“While maintaining our three non-nuclear principles, we will make efforts to serve as a bridge among nations with differing views and persistently encourage dialogue and actions among the various nations,” Japan’s Prime Minister Shinzo Abe said.

Hiroshima Mayor Kazumi Matsui urged countries to band together and fight nuclear proliferation so no nation is ever threatened by nuclear weapons again.

“Civil society must reject self-centered nationalism and unite against all threats,” Matsui said. “Hiroshima considers it our duty to build in civil society a consensus that the people of the world must unite to achieve nuclear weapons abolition and lasting world peace.”

Japan’s health ministry says the average age of survivors is now 83.3 years. Some said they fear the lessons from the bombing could be lost.

“My mother was in the house when it collapsed,” survivor Kazuko Naganuma, 72, said of his 95-year-old mother. “She also lost her younger sister.

“I grew up in Hiroshima, so Aug. 6 is a day about thinking about the bombing. But when you look outside Hiroshima, I’ve noticed that even Japanese people now don’t know so much about it.” 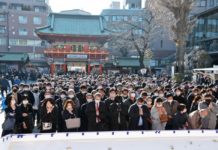 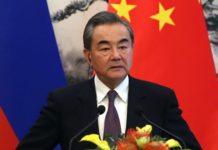