July 29 (UPI) — A federal judge on Tuesday ruled that New York must pay unemployment benefits to Uber and Lyft drivers.

District Judge LaShann DeArcy Hall ordered the New York Department of Labor to clear the backlog of unemployment payments owed to drivers for the ridesharing services within 45 days, in response to a lawsuit filed against the state by drivers and the New York Taxi Workers Alliance advocacy group.

The lawsuit says the state failed to require Uber and Lyft to submit data on driver earnings that would allow the state to process unemployment benefits.

In her ruling, Hall said the state’s failure to do so created “an avoidable and inexcusable delay in the payment of unemployment insurance” as drivers do not have earnings on file related to their work for the ridesharing services.

Hall gave the New York Department of Labor seven days to convene and train a workgroup of about 35 staff members to identify claims by drivers who have sought reconsideration after being told they were ineligible and take the steps to provide their unemployment benefits.

Uber and Lyft have maintained that their workers are independent contractors and not employees, and in her ruling Hall noted that the state made efforts to obtain wage earnings and information from Uber, Lyft and other app-based companies but they “appealed the vast majority of those decisions — and then abandoned most of those appeals, resulting in more delays.”

“While the New York Department of Labor may be hamstrung by the conduct of app-based for hire vehicle companies in its effort to obtain wage and earnings data universally, this should not, as it has, result in delays to the prompt payment of unemployment benefits to drivers,” she wrote. 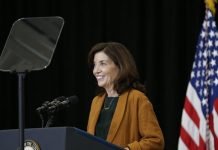