Aug. 28 (UPI) — Sen. Kirsten Gillibrand ended her campaign to be president Wednesday after she was shut out of the third Democratic presidential debates.

The New Yorker said that though she’s proud of what her team has accomplished, “it’s important to know how you can best serve.”

“After more than eight incredible months, I’m ending my presidential campaign. I know this isn’t the result we wanted. We wanted to win this race,” Gillibrand said in a video announcing her decision to bow out.

She was among a field of some two dozen Democrats seeking the party’s presidential nomination.

Wednesday was the deadline for the candidates to qualify for next month’s primary debate in Houston. The Democratic National Committee required candidates to receive at least 2 percent support in at least four national polls, or polls conducted in the early-voting states of Iowa, New Hampshire, South Carolina and Nevada. They also must receive grass-roots fundraising from at least 130,000 total unique donors and have a minimum of 400 unique donors per state in 20 or more states.

Gillibrand was not among them.

Today, I am ending my campaign for president.

I am so proud of this team and all we’ve accomplished. But I think it’s important to know how you can best serve.

To our supporters: Thank you, from the bottom of my heart. Now, let’s go beat Donald Trump and win back the Senate. 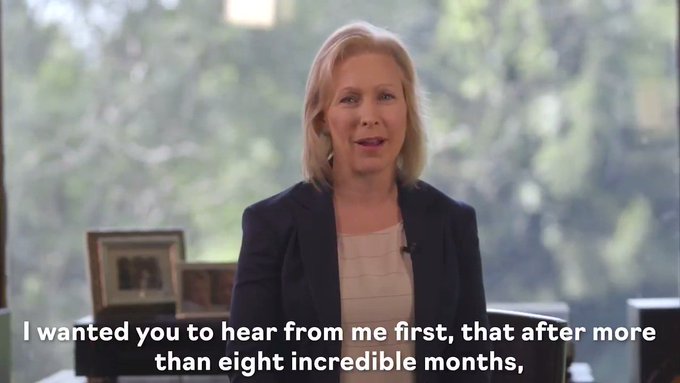