Oct. 27 (UPI) — The governors of New York and New Jersey declared states of emergency on Tuesday as a nor’easter drenched the region with heavy rains, caused some flash flooding and cut power to thousands of residents.

Flooding was reported early Tuesday after the area received several inches of rain. Authorities also said they have already had to perform some water rescues.

The rain began before dawn on Tuesday and was forecast to continue through the day, although it was expected to shift closer to Long Island and Connecticut later on Tuesday.

Murphy said 10 of New Jersey’s 21 counties were under a flood warning, and urged people to stay home and avoid unnecessary travel.

Some parts of northern New Jersey had received more than 3 inches of rain early Tuesday. Forecasters predicted that the area could see 6 inches. Flash flooding threatened the coastal areas of Middlesex and Monmouth counties.

“The exact location and movement of a slow-moving band of heavy rain with embedded thunderstorms through [Tuesday] afternoon will determine whether and where a swath of 5 to 6 inches of rainfall falls,” the National Weather Service said.

Strong winds are another dangerous element of the nor’easter. Gusts of up to 50 mph were expected along the eastern edge of the storm.

Meteorologists said the storm would likely remain offshore on Tuesday and strengthen, allowing the system to send strong winds into the coastline and affect major cities like New York City and Boston.

Electricity was cut to several thousand customers in both states by midday Tuesday, according to PowerOutage.us. Dozens of flights were canceled and delayed at Newark Liberty International Airport, according to FlightAware.com. The airport is one of three major airports that serve the New York City metro area.

In New York City, Mayor Bill de Blasio on Tuesday night thanked workers who stepped up in preparation for the ongoing storm.

“Stay vigilant, check on your neighbors and be safe when you’re traveling,” he tweeted.

Earlier in the day, he thanked those who “went the extra mile in the last 24 hours, including custodial staff at some 250 schools under threat of flooding, during a press conference.

“Our custodial staff stayed overnight to make sure there were no problems,” he said. “Thankfully, all those schools open fully without any difficulty today.”

More than 4,500 catch basins in the city were cleared, he said.

“Hopefully now we’ve seen the worst of it,” he said.

In Long Island’s Nassau County, Executive Laura Curran reporters that wind was to pick up from 2 p.m. and continue into Wednesday and preparations were underway for downed trees and powerlines.

They have only experienced a “couple of dozen” power outages and 16 car accidents, mostly on the north shore.

“We cannot remind people enough: Be careful. Drive with caution,” she said during a brief press conference. 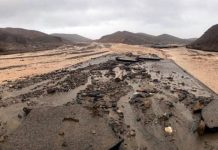