March 30 (UPI) — A New York man who was attacked at a Hanukkah celebration at a rabbi’s home three months ago has died from his injuries, officials said.

Neumann’s funeral was scheduled for Monday. His family said in January that his chances for recovery were grim.

Prosecutors have charged Grafton Thomas, 37, with the attack. He has pleaded not guilty to five state counts of attempted murder and one count of attempt of murder.

Defense attorney said Thomas suffers from an extensive history of mental illness may have been hallucinating the night of the stabbing.

Authorities are also looking into Thomas’ possible involvement in an attack on a Jewish man a month earlier.

“I am deeply saddened to learn of the passing of Josef Neumann,” Cuomo said in a statement.

“The repugnant attack shook us to our core, demonstrating that we are not immune to the hate-fueled violence that we shamefully see elsewhere in the country,” Cuomo said. “I promised [that] we would enact a first-in-the-nation law that calls this hate what it is: domestic terrorism.

“White supremacists, anti-Semites, anti-LGBTQ white nationalists — these are Americans committing mass hate crimes against other Americans, and the punishment for their vile acts must fit their crimes. These acts of hate may not have started in New York, but they must end in New York.” 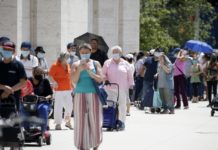