They departed the station in their Soyuz MS-17 spacecraft at 9:34 p.m. EDT Friday and landed safely under parachutes at 12:55 a.m. EDT Saturday in Kazakhstan after spending 185 days in space, NASA announced.

Ryzhikiov and Kud-Sverchkov are slated to return to their training base in Star City, Russia. Rubins is scheduled to fly home to Houston.

The trio on the Expedition 64 mission took off in a Soyuz rocket on October 14 from Kazakhstan to the International Space Station.

The six-month mission on the orbiting microgravity laboratory included work on hundreds of biology, biotechnology, physical science and Earth science experiments during their six months, according to NASA.

Rubins, who has a doctorate in cancer biology from Stanford University Medical School, was also aboard the first test flight of the then-new Soyuz MS spacecraft that launched to the ISS in July 2016, according to NASA.

On her first flight, she became the first person to sequence DNA in space, eventually sequencing over 2 billion base pairs of DNA in a series of experiments to analyze sequencing in microgravity.

The voyage was the second spaceflight for Ryzhikov and the first for Kud-Sverchkov.

When the trio left the station, Expedition 65 officially began with NASA astronaut Walker of SpaceX Crew-1, serving as station commander, marking the first time a Houston native has done so, NASA noted.

Walker will lead the crew until the departure of SpaceX Crew Dragon Resilience on April 28, at which point command will be handed over to Hoshide.

Rubins will discuss her latest mission in a news conference at 3:15 p.m. EDT Wednesday to air live on NASA television, the NASA app, and the agency’s website. 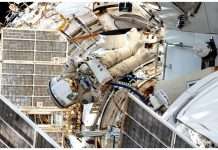