ORLANDO, Fla., Jan. 20 (UPI) — NASA is preparing the huge Space Launch System moon rocket for final tests on a Kennedy Space Center launchpad in February that would clear the way for a moon launch as early as late March.

The 322-foot-tall SLS rocket for the Artemis I mission is the largest since the last Saturn V rocket rolled out to a launch pad in 1972.

The first lunar mission in decades will help NASA understand how the giant new rocket and the Orion capsule work, Jim Free, NASA’s associate administrator for exploration systems development, said during a meeting of the NASA Advisory Council that ended Wednesday.

“We’re looking at the latter part of the March window right now” for launch, Free said. “That launch period ends on the 27th of March and the next one opens on April 8.”

NASA’s lunar plans include an Artemis II mission, now slated for 2024, that would carry four astronauts around the moon, and Artemis III in 2025, which would land Americans on the moon for the first time since Apollo.

NASA originally had hoped to launch the Artemis I mission years ago, and recently planned the mission for the end of 2021. But the agency dealt with numerous delays, including those caused by work interruptions during the COVID-19 pandemic.

In November, engineers decided to swap out a faulty engine controller, which pushed the launch into the New Year.

The agency must conduct a few final tests before locking down a date for the full rehearsal of launch at the pad, Amit Kshatriya, assistant deputy associate administrator for exploration systems development, said during the council meeting.

“We’re in a good configuration … and then we’ll have good confidence to give us rationale to roll out the vehicle for the wet dress rehearsal,” Kshatriya said.

For example, he said, engineers and technicians tested communication between the flight computers and other core stage systems and gimballed the engines as they would during flight to steer the rocket.

The upcoming wet dress rehearsal, which includes full fueling of the rocket, will mark the first time the SLS and Orion have been to a launch pad, a little over four miles from the Vehicle Assembly Building. 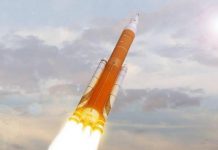