Dec. 11 (UPI) — There is an increasing probability that the volcano on New Zealand’s White Island will erupt within the next 24 hours, experts said, thwarting recovery efforts for the bodies of eight people believed to have died in Monday’s eruption.

Authorities said they were hopeful they’d be able to recover the bodies but worsening conditions have prevented them from returning to the island.

During a press conference, GNS senior volcanologist Graham Leonard said the conditions on the volcanic island have continued to worsen, increasing the probability of a second eruption within 24 hours from 30-50 percent on Tuesday to 40-60 percent on Wednesday. For comparison, on Oct. 29, the calculated risk of eruption was between 0.1-0.2 percent.

“Yesterday, there was a high risk of an eruption. Today there is even a higher risk of eruption and the parameters are worsening at the moment,” he said.

The risks rescuers face on the island would include not only eruption but the inability to breathe and see, he said.

Forty-seven people were on or near White Island, known locally as Whakaari, when it erupted Monday at 2:11 p.m., killing six people, whose bodies have been returned to the New Zealand mainland. Police said Tuesday that eight people remain unaccounted for and their bodies are believed to still be on the island.

New Zealand deputy police commissioner John Tims said they are ready to return as they have been working with defense, fire and emergency partners to establish a plan to recover the bodies.

“We are confident in our ability to deliver the rescue operation once we can be sure we can manage the very real dangers that anyone going onto the island would face,” he said. “Those deploying to the island will likely encounter serious physical and chemical hazards, for which we must be prepared.”

New Zealand Police on Wednesday released the names of nine people involved in the incident who have been classified as missing as they were neither identified as in hospital nor were they discharged from one.

Consisting of seven Australians and two New Zealanders, police said it was a partial list “as we have been unable to speak with all next of kin involved.”

Of the 30 tourists injured in the eruption, 29 were in intensive care and burn units nationwide with 22 requiring airway support “due to the severity of their burns and other injuries,” Dr. Peter Watson, chief medical officer of the Counties Manukau District Health Board, said during an evening press conference.

He said they expected to need 39,270 square-feet of skin grafts to treat the patients.

Dr. John Kenealy, clinical director of Surgery and preoperative services at Middlemore Hospital in Auckland where the national burn unit is located, said their operating theaters have been running 24 hours a day treating patients. 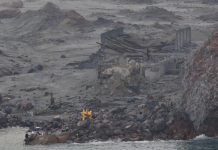 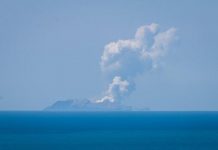 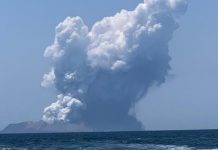