Feb. 21 (UPI) — A Nigerian military plane crashed on approach to Nnamdi Azikwe International Airport in Abuja on Sunday, killing all seven aboard, a spokesman for nation’s Air Force said.

The Beechcraft King Air 350i “crashed while returning to the Abuja Airport after reporting engine failure enroute Minna,” Air Vice Chaiman Marshal Ibikunle Daramola posted on Twitter. He urged the “general public to remain calm & await the outcome of investigation.”

James Odaudu, a spokesman at the Ministry of Aviation, said the twin-turboprop plane crashed landed on the final approach path of Abuja Runway 22 at 11:48 a.m. local times.

An aviation worker told CNN he witnessed the pilot attempted to swerve the plane to its crash site which is in a desolate area. He said the aircraft narrowly avoided warehouses and makeshift settlements around the Nnamdi Azikwe International airport.

The plane seats up to two crew members and 11 passengers.

The 300 series is part of the original Super King Air family. In 1996, the “Super” designation was dropped, and they form the King Air line with the King Air Model 90 and 100 series.

More than 7,300 King Airs and Super King Airs have been delivered by May 2018 since 1964, making it the best-selling business turboprop family in the world, according to Beechcraft. 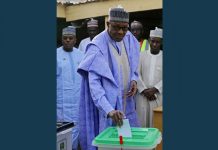