Dec. 22 (UPI) — A prison camp in  North Korea may have served as the burial ground for thousands of captives, according to a new report from the Committee for Human Rights in North Korea in Washington.

The group’s findings on North Korea’s Chungsan No. 11 Detention Facility, published Monday, include satellite imagery analysis of the 5-square-mile camp and details of conditions at the site, taken from defector testimony.

According to HRNK, the facility remains operational and “well maintained” by North Korean standards. Prisoners at Chungsan, a nonpolitical prison camp in South Pyongan Province, work as forced laborers engaged in agricultural and livestock activities.

The report also includes estimates of the prison population. Satellite imagery analysis shows that it could be between at least 1,500 and 2,000, with “likely ranges higher.”

Deaths could occur when prisoners attempted to flee or defied authority, analysts said.

Captives “were reportedly not publicly executed as is typical at political prison camps.

“Rather, they were reportedly tortured or secretly executed.”

Defectors said several camp units raised pigs. The pork was “reportedly exclusively used to feed the privileged classes within the capital city of Pyongyang,” according to the report.

Other testimonies indicate about 2,000 prisoners either died or were executed annually in the early 2000s. The bodies were “buried without tombstones” in a nearby area called “flower mountain.”

Defectors in the South have condemned the alleged human rights abuses of the Kim Jong Un regime, but have been met with opposition from the South for some of their activities.

Seoul is focused on changing perceptions about recent policy, including a new ban on anti-Pyongyang leaflets at the border.

Yonhap reported Tuesday that Seoul’s unification ministry is stepping up communication with the international community regarding the ban. South Korean officials have said the new law is necessary for citizen safety near the DMZ. 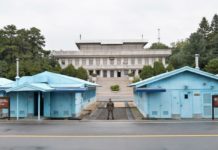