April 27 (UPI) — National Rifle Association President Oliver North has lost his nomination for a second year as NRA president after the CEO alleged he tried to extort him.

North said Saturday in a letter read to NRA members at the nonprofit organization’s annual meeting in Indianapolis that he hasn’t been renominated for a second one-year term as president against his wishes.

CEO Wayne LaPierre had written a letter to the board Thursday accusing North of attempting to extort him and pressure him to resign from the nonprofit over alleged financial transgressions. Among the claims, North said that LaPierre had charged more than $200,000 in wardrobe expenses to a vendor.

Earlier in the week, North had also told the board’s executive committee allegations of hefty travel expenses charged to a vendor and sexual harassment allegations against a senior official, according to people familiar with the matter.

“There is a clear crisis that needs to be dealt with quickly and responsibly,” North said, referring to allegations and recent news about NRA insiders profiting from the organization, adding that the allegations could threaten its nonprofit status.

An NRA attorney and board member said the NRA had investigated many of North’s accusations and found that LaPierre’s wardrobe expenses were justified given his public appearances.

Part of the dispute between the NRA’s top executives is NRA’s rift with the advertising firm, Ackerman McQueen. The NRA sued the advertising agency earlier this month, alleging unjustified billings, including expenses for an NRATV documentary program produced by the ad firm, which North hosted. The ad agency has called the suit “frivolous” and inaccurate.”

North, a former Marine Corps lieutenant colonel and figure in the Iran-Contra affair, said he joined the NRA after LaPierre urged him to retire from a Fox News pundit job, and he “accepted a salaried position at Ackerman Queen.

LaPierre accused North of “production shortfalls” in his documentary series, “Oliver North’s American Heroes,” saying in a letter to the board that he was paid “millions of dollars annually,” by Ackerman Queen, for a dozen episodes, but only three episodes had been delivered. 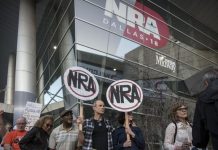 NRA shuts down production of NRATV