April 19 (UPI) — David Turpin, 57, and Louise Turpin, 50, each pleaded guilty in February to 14 felony charges related to starving, torturing and holding captive the 12 children, who ranged in age from 2 to 29, in their Perris home.

Police arrested the Turpin parents in January 2018 after their 17-year-old daughter told police she escaped their home. Law enforcement officials said they found “several children shackled to their beds with chains and padlocks in dark and foul-smelling surroundings” upon searching the home.

The siblings told police they were often starved while their parents ate regular meals and even left food out in the kitchen but forbade their children from touching it. Nearly all of the Turpin siblings were malnourished and undersize for their ages.

Schwartz called what the Turpins did to their children “selfish, cruel and inhumane.”

Two of the adult Turpin children, whose names were not revealed, appeared at the sentencing hearing. They both read statements.

“My parents took my whole life from me,” a daughter said, adding that she’s moved on with her life. “I’m a fighter and I’m strong.”

One of the sons said he’s forgiven his parents. 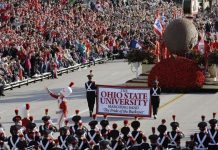