DALLAS, July 9 (UPI) — The man who gunned down Dallas police officers had a expansive cache of bomb-making materials and reserves of combat gear that included ballistic vests, rifles, ammunition and a personal journal of combat tactics in his home, investigators said.

Micah Xavier Johnson was a former Army Reservist who was sent home from Afghanistan following a sexual harassment incident, an unusual disciplinary move for an incident that is typically handled through counseling.

Investigators continue to dig into the background of the man who opened fire at a Black Lives Matter demonstration in Dallas on Thursday, killing five police officers and injuring seven. They uncovered Johnson, 25, was an Army veteran did not have a criminal history. The “likes” on his Facebook profile indicated he was a staunch supporter of radical black power movements.

Johnson died when police detonated an explosive on a robot near an area where he had barricaded himself. Police said he acted alone in the shooting that also left two civilians injured. The attack during a peaceful rally in protest of the controversial shooting deaths of Alton Sterling and Philando Castile was the deadliest day for police since 9/11.

The New York Times reported Johnson served in the Army Reserve from 2009 to 2015 and he left as a private first class.

He was deployed to Afghanistan in November 2013 and worked as a mason and carpenter. He was not involved in combat or injured.

Military lawyer Bradford Glendening said Johnson was accused of sexual harassment by a female soldier in his unit. He quoted an entry from Johnson’s file dated May 2014 where the woman requested a protective order and suggested he receive “mental help.”

Glendening told the Dallas Morning News Johnson was sent home from Afghanistan following the incident, which he said was unusual as the discipline for sexually harassment is typically counseling.

“He was very much disliked by his command, that was clear,” Glendening said.

According to the Anti-Defamation League, the New Black Panther Party is the “largest organized anti-Semitic and racist black militant group in the United States” and African American Defense League founder Mauricelm-lei Millere has a history of calling for violence against police.

“Usually after a high profile police-related shooting he takes to social media to encourage violence against police,” Oren Segal, director of the Anti-Defamation League’s Center on Extremism, said of Millere.

Johnson’s profile also contained a photo with Richard Griffin or “Professor Griff” of the rap group Public Enemy. Griffin was expelled from the group for anti-Semitic statements and embraced “a radical form of Afrocentrism,” according to Dallas police.

Griffin stated via Twitter that he did not know Johnson and does not advocate killing police officers.

“I will not sit back and let these people assassinate my character and tie me to the Dallas shootings,” he wrote.

Dallas Police Chief David Brown said that Johnson told police “he was upset about Black Lives Matter” and was angry about the fatal police shootings in Louisiana and Minnesota. 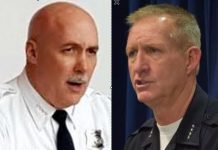 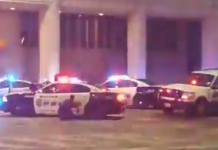