SANTIAGO, Chile, Sept. 16 (UPI) — A powerful earthquake with a magnitude of 8.3 struck off the coast of Chile on Wednesday, the United States Geological Survey said.

The earthquake hit about 35 miles west of the Chilean town of Illapel at 6:45 p.m. EDT, the USGS said. The epicenter is located about 150 miles northwest of the capital, Santiago.

The Pacific Tsunami Warning Center issued warnings of a possible tsunami from the earthquake, but none have yet been spotted.

Although 8.3 is a substantial magnitude for an earthquake, no injuries or damage was immediately reported after the quake struck.

Chile sits on very geologically active crust and numerous earthquakes with a magnitude of 8 or greater have struck the region in the last century, the USGS said. 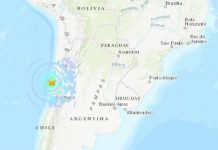