Jan. 17 (UPI) — Prince Harry has filed a legal challenge against a decision by the British government preventing him from personally paying for police protection when visiting the country.

Harry’s legal team said he wants to bring his children Archie and Lilibet to Britain so they can “know his home country” but said such a visit was too risky without proper police representation, according to a statement shared with CNN and NBC News.

A representative for Harry said his privately funded U.S. security team “cannot replicate the necessary police protection needed while they are in Britain,” citing an incident in the summer of 2021 after he left a charity event in London.

Harry and his wife Meghan Markle lost their publicly funded police protection in Britain when they stepped down as working royals in 2020 and have since been living in Los Angeles after a stint in Canada, where they were protected by government security until they formally stepped away from the royal family.

In the statement, Harry’s representatives said he wanted to pay for police protection himself “as not to impose on the British taxpayer” but would not be able to without permission from the British Home Office.

He launched the legal challenge in September after an attempt to negotiate on the issue was rejected but made the decision to make the information public “in order to set the facts straight” after a leak in a British tabloid.

The representative said Harry — the grandson of Queen Elizabeth II and son of Princess Diana — “inherited a security risk at birth” and that his family has been subjected to “well documented neo-Nazi and extremist” threats in recent years.

“The U.K. will always be Prince Harry’s home and a country he wants his wife and children to be safe in. With the lack of police protection, comes too great a personal risk. Prince Harry hopes that his petition — after close to two years of pleas for security in the U.K. — will resolve this situation,” the statement said. 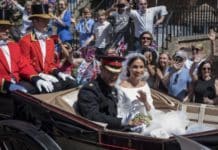