Aug. 4 (UPI) — The Investigative Committee of Russia has opened a probe into a Russian airline’s Mi-8 helicopter crash Saturday in Siberia that killed all 18 people aboard.

The helicopter, which belonged to UTair, a Russian airline, crashed Saturday morning in the north of Krasnoyarsk region, eastern Siberia, near the Vankor oil pumping station.

Fifteen passengers and three crew members aboard the helicopter were killed, a source at the emergency services told the state-owned TASS news agency.

The Criminal Investigation Department of Russia continues to investigate the crash under the criminal code for violation of safety rules that resulted in the death of two or more persons by negligence, Kommersant reported.

Investigators are looking into all possible reasons for the crash including pilot error, the Russian daily newspaper said.

The Mi-8, flying at an altitude of about 328 feet, hooked rotor blades with the cargo of a Mi-26 helicopter of the same company flying nearby before the crash, a report on Investigative Committee’s website said.

The Mi-26 helicopter made an emergency landing and no one was hurt in that aircraft. 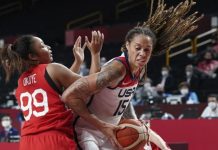