WALBRZYCH, Poland, Aug. 28 ( Danielle Haynes ) — A culture official in Poland said radar imagery appears to confirm a story by two men who said they know the location of a mysterious Nazi train that may contain gold or other treasures.

Deputy Culture Minister Piotr Zuchowski said Friday he’s “more than 99 percent sure that the train is there,” but couldn’t confirm what was inside the train.

“We do not know what is inside. Probably military materials, some kind of jewelry, art and archives,” he said.

Trains commonly hauled stolen valuables from eastern Europe to Berlin during World War II, and the story of the missing train, presumably abandoned as Soviet forces marched through Poland on their way to Germany at the close of the war, is the stuff of local legend. The mystery train is believed to be in an abandoned tunnel near Ksiaz Castle, in southwestern Poland.

Local legend says the train contains gold, precious stones, art and weapons. The two men who brought the train to the government’s attention — a Pole and a German — have requested 10 percent of the haul in exchange for their knowledge.

Zuchowski said the two men were made aware of the possible discovery by a man who drew them a map while on his death bed, NBC News reported. The man reportedly helped hide the train some 70 years ago and wanted to pass on his knowledge before he died.

The culture minister warned treasure-seekers not to go looking for the train because it could be booby trapped.

“There is a huge probability that the train is mined,” he said in a statement.

Zygmunt Nowaczyk, the deputy mayor of Walbrzych, wouldn’t reveal the exact location of the train, but confirmed to the BBC it is “within our administrative boundaries.” 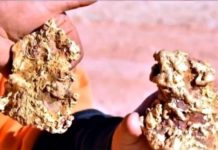 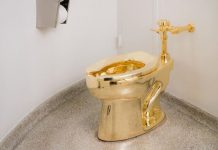 Solid gold toilet worth $1.25 million stolen from palace in Britain