“Given the health restrictions and limitations in place within the state of North Carolina, we are planning for the Charlotte activities to be closed to the press Friday, August 21 — Monday, August 24,” the statement said.

“We are happy to let you know if this changes, but we are working within the parameters set before us by state and local guidelines regarding the number of people who can attend events.”

The story was first reported Saturday by the Arkansas Democrat Gazette.

The GOP convention was originally planned for Charlotte, but the White House made the decision to move part of the event to Jacksonville, Florida, when North Carolina refused to waive crowd restrictions on large gatherings during the COVID-19 pandemic.

The Republicans changed plans a second time last week when the number of COVID-19 infections began to spike across much of Florida. 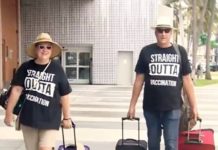