March 28 (UPI) — Rhode Island police officers plan start pulling over cars and knocking on doors to track down visitors from New York on Saturday as part of an effort to stem the spread of the coronavirus, Gov. Gina Raimondo said.

he said any travelers from New York in Rhode Island will be forced to quarantine for 14 days. Those who don’t could face jail time.

“Right now we have a pinpointed risk,” Raimondo said Friday during a news conference. “That risk is called New York City.”

Police officers and members of the National Guard will ask people throughout the state whether they’ve been in New York recently. They’ll also pull over cars with New York state license plates, with a particular focus on the Newport Bridge area.

Rhode Island isn’t the only state working to restrict travel amid the COVID-19 pandemic.

Alaska is requiring a 14-day quarantine for anyone outside the state, Hawaii is asking visitors to stay way and Florida Gov. Ron DeSantis said anyone from the New York area must stay in quarantine for two weeks after arriving in Florida.

RELATED FDA fast-tracks 15-minute COVID-19 test
The Florida Highway Patrol is installing check points at the state border to keep visitors from coronavirus “hot spots” from crossing the state line. Officers will tell visitors from Louisiana to isolate for 14 days and tell officials where they plan to stay.

On Monday Gov. Ron DeSantis signed an order requiring visitors from New York to self-isolate on arrival, and officials in the Florida Keys have set up two checkpoints preventing tourists from reaching the islands.

Meanwhile, President Donald Trump said Saturday that he is considering a quarantine on New York, New Jersey and Connecticut to halt the spread of the novel coronavirus.

During remarks in Norfolk, Va., as the Navy’s hospital ship the USNS Comfort deployed to New York City to provide relief to New York’s overwhelmed health care system, Trump said an announcement would be coming “very quickly, very shortly” on whether to enforce a quarantine in the region because it’s “such a hot area.”

The restrictions come as the United States overtook Italy with the most number of known coronavirus cases in the world. Johns Hopkins University said the United States had at least 104,000 cases and 1,700 deaths as of Saturday morning. The New York Times’ tracker put the case count at 102,000 and the number of deaths at 1,646. 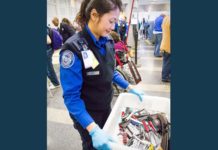