July 22 (UPI) — Robert Morgenthau, New York County’s district attorney for over 30 years, died at the age of 99, his wife said.

“He died like he lived, which was he was in it for the long haul,” she said. “He never gave up, whether it was prosecuting mobsters or white-collar criminals or drug lords. He never gave up.”

The always humble Morgenthau holds the title of Manhattan’s longest-serving district attorney, taking up the office in 1975 and only setting it down at the age of 89 in 2009 after nine terms.

The man known for being feared in the courtroom by mobsters and Wall Street, Morgenthau began his career in 1961, when he was appointed to be the U.S. attorney for the Southern District of New York by President John F. Kennedy.

His wife said Morgenthau credited others for the successes he achieved during his career, stating he claimed to be “just the frontman.”

“He said ‘I was just a helmsman,” she said. “Everybody else did the work.”

Morgenthau made a name for himself by going after corrupt politicians, the mob and devious banks that saw him garner the support of both political parties.

In one of his final cases, Morgenthau got Credit Suisse to forfeit some $536 million for violating financial sanctions regulating dealings with Iran.

While the U.S. Treasury Department only wanted to slap the international bank with civil penalties, Morgenthau threatened criminal charges.

The bank, which had been stonewalling the U.S. government, only agreed to pay up once he threatened jail time.

He then left his post as New York’s top prosecutor four days later.

New York Police Commissioner James O’Neil said no one did more than Morgenthau for the public’s good, calling him New York City’s “most innovative prosecutor.”

“His vigorous prosecutions helped push the murder rate down 90 percent during his 35 years in office, which made our great city safer for all,” he said on Twitter.

Robert Morgenthau, who died Sunday at 99, was the most innovative prosecutor in NYC history. No one did more over a lifetime to serve the public. His vigorous prosecutions helped push the murder rate down 90% during his 35 years in office, which made our great city safer for all. 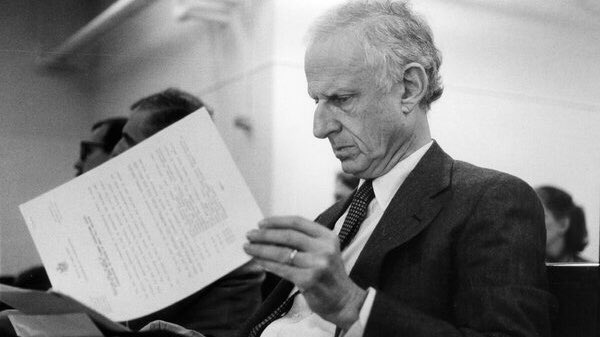 He is survived by his wife and seven children.