Schumer, D-N.Y., issued a statement saying unredacted emails viewed by national security website Just Security raise questions about Trump’s decision to withhold $391 million in military assistance for Ukraine that can only be answered by testimony from key Trump administration officials.

Trump faces a trial in the Senate on two articles of impeachment approved by the House charging Trump with having abused the powers of the presidency and having obstructed Congress for withholding the aid in order to pressure Ukrainian President Volodymyr Zelensky to investigate Democratic presidential candidate Joe Biden and his son, Hunter Biden, who worked for a Ukrainian gas company for five years.

House Republican Leader Mitch McConnell has said he is not interested in including witnesses and documents at the Senate trial.

deputy challenging impeachment subpoena
“The newly-revealed unredacted emails are a devastating blow to Senator McConnell’s push to have a trial without the documents and witnesses we’ve requested,” he said. “These emails further expose the serious concerns raised by Trump administration officials about the propriety and legality to cut off aid to Ukraine to benefit himself.”

The report by Just Security, states that Duffey sent an email to acting Pentagon comptroller Elaine McCusker that there was “clear direction from POTUS to continue to hold” the aid and informing her he would send new paperwork to extend the freeze.

The report describes unredacted versions of emails released by the Center for Public Integrity in which Department of Defense and OMB officials, including Duffey and McCusker that the hold would violate the Impoundment Control Act, which requires the executive branch to spend money as appropriated by Congress.

Schumer said the latest information “only further implicates President Trump and underscores the need for the Senate to subpoena the witness and documents we’ve requested at the onset of a trial.”

“The American people deserve a fair trial that gets to the truth, not a rigged process that enables a cover-up,” he said. 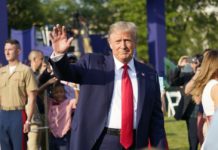 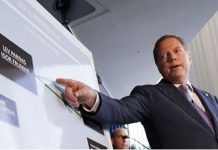