Few things in the natural world come cheaply. Giving off perfume requires a significant energy investment from plants. According to scientists at the Hebrew University of Jerusalem, it’s an investment plants often can’t afford as rising temperatures suppress growth.

Scent isn’t a luxury. Like color, shape and other aesthetic flourishes, it’s an important strategy for attracting pollinators.

Can’ani found two hybrid petunia varieties grown at higher temperatures produce fewer phenylpropanoids, the volatile compounds that give flowers their unique scents. The diminished production was linked to a reduced activity of proteins that synthesize these compounds.

The research was published in the journal Plant, Cell & Environment.

Can’ani’s research focuses on the process of scent production in plants.

Each flower fragrance can consist of hundreds of volatile compounds from a variety of biochemical groups. The genetic mechanisms underlying the production of these compounds are not well understood.

In a separate study, Can’ani showed that phenylpropanoid production could be maintained or increased regardless of ambient temperature by augmenting the Arabidopsis thaliana PAP1 gene.

The second study was published in the journal New Phytologist. 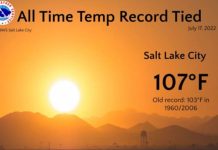