Per Sandberg, 58, said he took a government phone with him when he visited Iran last month with Bahareh Letnes, a 28-year-old former beauty queen.

Taking the government phone was a security breach that made him susceptible to Iranian hackers, the BBC reported. And Norwegian Prime Minister Erna Solberg confiscated his phone and gave it to police for review.

Letnes, who reportedly manages a fish export business, called the criticism of Sandberg a “witch hunt.”

“I have been demolished in a democratic country,” she wrote in a text to NRK. “How can we now stand as an example to dictatorial countries. Are we no better than them?”

Sandberg told reporters he plans to hold a news conference to address his resignation on Wednesday.

In addition to being the minister of Norway’s second-largest industry, Sandberg is the deputy leader in Norway’s Progress Party, which is best-known in U.S. media for being critical of immigration. 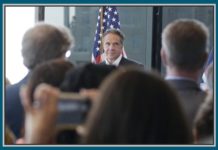