Aug. 6 (UPI) — U.S. Secretary of State Mike Pompeo said Wednesday the United States is increasing its efforts to prevent China from accessing the private data of Americans, stating they will work to remove Chinese-based smartphone applications such as TikTok from the U.S. market as they pose “significant threats.”

In a press availability in Washington D.C., the United States’ top diplomat said he was expanding a Trump administration initiative called “Clean Network” that began in late April to five new technological segments, including smartphone apps, to protect Americans from the threat posed by the Chinese Communist Party.

“President [Donald] Trump has mentioned impending action on TikTok, and for good reason,” he told reporters. “With parent companies based in China, apps like TikTok, WeChat and others are significant threats to the personal data of American citizens, not to mention tools for CCP content censorship.”

The hugely popular video-sharing social networking app has gained much focus from the Trump administration over the summer with Pompeo signaling it out in July as an app owned by a Chinese company that they were looking at banning from the United States to “deny the Chinese Communist Party access to the private information that belongs to Americans.”

Trump has threatened ByteDance, the company that owns TikTok, that it has until Sept. 15 to sell it to Microsoft or it will be pulled from the United States’ virtual storefronts.

White House Press Secretary Kayleigh McEnany said Tuesday that action would be taken against the app due to the national security risk it poses.

“We all agree that there needs to be a change, especially with TikTok collecting significant amounts of private data on users,” she told reporters, explaining that laws in China require its companies to cooperate with its security and intelligence services by handing over information. “And what this means is that these entities ultimately answer to the CPP, which actively undermines U.S. interests and is hostile to American values and the rights of individuals.”

Pompeo added Wednesday that the United States was also working to prevent telecommunications, such as Huawei and “other untrusted vendors,” from pre-installing U.S. apps on their devices.

“We don’t want companies to be complicit in Huawei’s human rights abuses or the CCP’s surveillance apparatus,” he said.

Pompeo said as part of the so-called Clean Carrier ensure to prevent Chinese telecoms from providing international services between the United States and foreign destinations, he was also joined by Attorney General William Barr, Secretary of Defense Mark Esper and Acting Secretary of Homeland Security Chad Wolf in urging the Federal Communications Commission to revoke and terminate the authorizations to China Telecom and three other unnamed companies from providing services to the United States.

Concerning Cloud-based technologies, Pompeo added that the State and Commerce Departments to limit such services run by Alibaba, Baidu, China Mobile and others from accessing U.S. data.

In a Wednesday statement that accompanied the briefing, Pompeo said international momentum for this Clean Network was growing with more than 30 nations considered “Clean Countries” and with many of the world’s largest telecoms being “Clean Telcos” as they have committed to exclusively using trusted vendors.

Pompeo has been lobbying countries to bar Chinese firms from participating in their 5G infrastructure, with England joining the list of such countries last month.

“The United States calls on our allies and partners in government and industry around the world to join the growing tide to secure our data from the CCP’s surveillance state and other malign entities,” he said. “Building a Clean fortress around our citizens’ data will ensure all of our nations’ security.”

The move comes amid fraying relations between Beijing and Washington with both sides exchanging diplomatic blows.

Chinese State Councilor and Foreign Minister Wang Yi criticized the United States as being hypocritical, charing it with conducting its own wire-taps, mass surveillance and other such acts.

“It is not qualified to build a coalition of ‘Clean Countries’ because itself is dirty all over,” Wang said in a tweet from the Chinese Embassy in the United States. 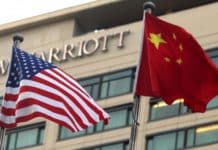