The epicenter of the earthquake that struck Wednesday near Chile’s coast was 29 miles west of the town of Illapel, where nearly 2,000 people were without potable water, and 142 miles north of Santiago, the capital.

A tsunami was moving across the Pacific Ocean, with most of its power expected to be focused westward toward French Polynesia, including Tahiti, The Weather Channel reported. The tsunami waves in the Hawaiian islands measured up to 3 feet in height.

The waves were not considered a danger to people inland, but can create unusual or dangerous currents that may affect swimmers and boaters.

Waves up to 15 feet in height hit the coastal town of Coquimbo, Chile, where nearly all residents lost electricity. A tsunami alert was momentarily issued for the entire Chilean coast, but was gradually rescinded at different locations until it was completely lifted at 6:22 a.m. local time Thursday.Victims of the earthquake included a 35-year-old woman who was killed by a falling roof, a 20-year-old woman killed by falling rocks and a man in his 80s who had a heart attack.

“Everyone ran. The windows shook. Things fell … The impact was strong,” Santiago resident Emily Hersh told CNN Español. “Even after I left, I felt the earth move.”

The earthquake was the result of “thrust faulting on the interface between the Nazca and South America plates in Central Chile,” the U.S. Geological Survey said.

There have been several aftershocks since the quake, all between magnitudes of 6.4 and 7.0.

Chile sits on very geologically active crust and there have been more than 15 other earthquakes of a magnitude of 7 or greater in the past century. The largest earthquake on record occurred in southern Chile in 1960 with a magnitude of 9.5.

An 8.8-magnitude earthquake struck Chile in 2010, causing more than 500 people to die due to the quake, a tsunami and a slow government response. 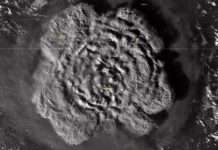