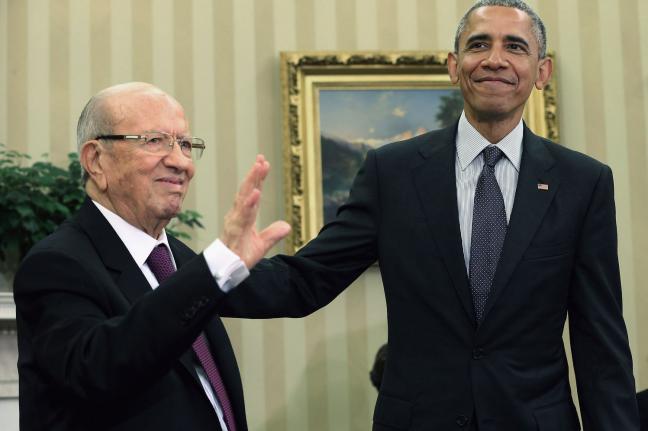 [/one_fourth][three_fourth_last]
The meeting was the first between Obama and Essebsi, Tunisia’s first democratically elected president. He was sworn into office in January.

“At this critical time in world history, we think it’s very important for us to continue to expand the economic assistance that we’re providing so that ordinary Tunisians can feel the concrete benefits of a change to a more open and competitive economy,” Obama told reporters during the meeting.

“I committed that as Tunisia continues to embark on important structural reforms to the economy, that we will not only provide short-term aid, but also try to provide the kind of bridge and support that’s necessary to complete those reforms,” he added.

The White House said Obama is working with Congress to give at least $100 million in assistance to Tunisia to add to the $570 million the United States has given since the start of the 2011 revolution.

The United States has also offered up to $500 million in loan guarantees for economic reforms, Voice of America reported.

Essebsi said Tunisia’s democratic transition has been hampered by terrorist groups. He said the country has “a long way ahead of us.”

“The democratic process is always vulnerable and threatened by terrorists, by parties that do not believe in democracy,” Essebsi said.

Meanwhile, Obama and Essebsi co-authored an opinion article in The Washington Post on Thursday to coincide with their historic meeting.

“Our two nations now have an unprecedented opportunity to forge an enduring partnership based on shared interests and values,” they wrote.

“The United States is committed to helping Tunisians build transparent, effective and accountable institutions that truly serve the people. Together, we can empower civil society and a free press, which strengthen democracy. Even as we confront security threats such as terrorism, we must uphold the universal values of tolerance, inclusivity and freedom of speech that terrorists seek to destroy.”