Sept. 2 (UPI) — U.S. Marshals have captured two of three men who escaped from a Tennessee jail over the weekend, authorities said, as a manhunt continues for the third.

U.S. Marshal Tyreece Miller announced in a statement Tuesday that Antoine Thomas was apprehended late Monday night after agents received a tip that led them to a residence in Dyer County, about 50 miles northwest of Jackson.

“Officers say residents there initially attempted to deny them entrance to the address but Thomas was eventually taken into custody without further incident,” the U.S. Marshals Service said.

The Dyer County Sheriff’s Office said the tip was received at 9 p.m. with county deputies entering the residence before midnight and finding Thomas hiding in a bathroom closet.

Thomas was returned to the county jail after being treated at a local hospital for injuries sustained during the escape, the statement said.

Thomas, Jashawn Branch and Michael Deshon Bolden, inmates at the Dyer County Jail, escaped shortly after midnight Sunday by overpowering a correctional officer, taking their keys and then scaling a 16-foot-tall razor wire fence, fleeing the facility, officials said, adding evidence at the scene suggests the inmates were severely cut during their escape.

The Dyer County Sheriff’s Office said Branch was taken into custody without incident a half-hour after the escape as a deputy saw him trying to enter a residence. He required medical treatment due to cuts to his hands, authorities said.

Bolden, who was being held at the jail on drug charges, remains at large, and the U.S. Marshals Gulf Coast Regional Fugitive Task Force has offered up to $2,500 for information that leads to his arrest.

“We are asking the public for help in this case,” Miller said in a statement. “It is in the interest of the public that these escapees are apprehended swiftly and safely.” 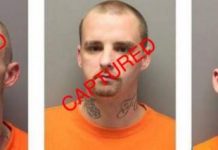 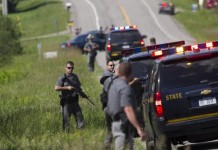