MANILA, Oct. 15 (UPI) — Typhoon Sarika has intensified as it continues to move toward the Philippines, threatening landfall as early as Sunday morning local time.

The Philippine Atmospheric Geophysical and Astronomical Services Administration said the eye of the storm, known locally as Typhoon Karen, was located 96 miles east of he city of Quezon during its 8 p.m. PHT advisory, according to CNN Philippines.

The storm is carrying approximately 86 mph winds and gusts of up to 121 mph as it moves West Northwest toward the province of Aurora where it is expected to make landfall between midnight and 2 a.m. PHT.

The weather bureau estimated a moderate to heavy amount of rainfall within the storms 310-mile diameter.

The National Disaster Risk Reduction and Management Council was placed on red alert status in preparation for the storm’s arrival.

Residents in five municipalities were evacuated, according to the Provincial Disaster Risk Reduction and Management Office in Aurora.

Another 3,000 people were evacuated in Catanduanes, while 4,000 passengers were stranded in different ports of Luzon and Visayas as PAGASA warned of flash floods and landslides in areas facing tropical cyclone warnings. 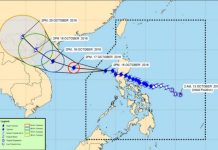