KABUL, Aug. 29 (UPI) — Two days before the deadline for removing all U.S. personnel from Afghanistan, evacuations from country decreased as the Kabul capitol was rocked with an explosion closed to the airport in a drone‘s defensive strike of a suspected car bomb.

The bomb caused a significant secondary explosion and revealed a substantial amount of explosive material, CNN and The Washington Post reported.

“We are confident we successfully hit the target. Significant secondary explosions from the vehicle indicated the presence of a substantial amount of explosive material. We are assessing the possibilities of civilian casualties, though we have no indications at this time. We remain vigilant for potential future threats.”

Images and video showed dark smoke billowing from a house or compound in a mainly residential area.

Late Saturday night, the U.S. State Department Bureau of Consular Affairs issued an immediate warning for US citizens to evacuate areas near the Kabul airport due to a “specific, credible threat.”

Approximately 2,900 people were evacuated from the capitol Kabul from 3 a.m. EDT Saturday to 3 a.m. ET Sunday, the White House announced. They were carried out by 32 U.S. military flights, which carried approximately 2,200 evacuees, and nine coalition flights with 700 people.

From Friday into Saturday, approximately 6,800 people were evacuated from Kabul.

Secretary of State Antony Blinken said that the administration is still actively working to evacuate about 300 American citizens from Afghanistan who have indicated that they want to leave the country.

Blinken also told ABC news the United States will not have a diplomatic presence in Afghanistan after Tuesday. He said re-opening the embassy will depend on the Taliban’s behavior “in the weeks and months ahead.”

Biden flew in Air Force One to Dover Air Force Base in Delaware.

The president and the first lady met with the families of fallen American service members, then would attend the dignified transfer.

“The dignified transfer is not a ceremony; rather, it is a solemn movement of the transfer case by a carry team composed of military personnel from the fallen member’s respective service,” Air Force Mortuary Affairs Operations said.

In a statement, Biden praised the 13 service members killed in the attack at the Hamid Karzai International Airport, saying they were “heroes who made the ultimate sacrifice in service of our highest American ideals and while saving the lives of others. Their bravery and selflessness has enabled more than 117,000 people at risk to reach safety thus far.” 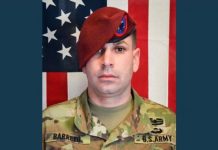 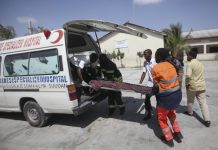