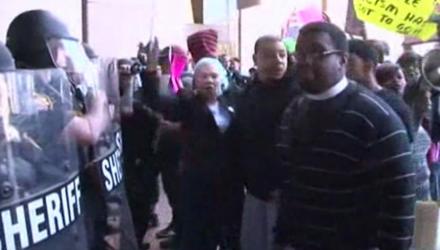 Cleveland Police Chief Calvin Williams said Sunday that authorities attempted to allow demonstrators to gather, but made arrests following some violence from protesters or when protesters refused police orders.

Brelo was found not guilty of voluntary manslaughter after participating in a November 2012 shooting that killed an unarmed man and woman.

Three people were arrested after someone was injured when an object was thrown through a restaurant window. The suspects were arrested for aggravated riot, felonious assault and obstructing justice.

“As I stated yesterday, we will not allow acts of violence and as soon as violent acts began, our officers moved in,” Chief Williams said in at a press conference.

Judge John P. O’Donnell ruled that Brelo’s actions in 2012 were justified by law because he and other officers believed the couple — who were involved in a high-speed chase — was armed.

Victims Timothy Russell, 43, and Malissa Williams, 30, died after leading over 62 police vehicles on a chase across Cleveland. When the 1979 Chevy Malibu finally stopped, 13 officers shot at least 137 rounds into the car and its occupants.

Police opened fire just as the vehicle stopped because they mistook the car’s backfiring noise from earlier in the chase for gunshots from the two occupants. Each of the two were shot at least 20 times.

Marilyn Malara contributed to this report.