In the Mexican state of Campeche, gay couples were legally unable to adopt. In its decision, the Supreme Court ruled article 19 of a law regulating civil unions unconstitutional, now allowing homosexual couples to adopt underage children.

The court claimed that the article discriminated against children’s rights. Its president, Luis Maria Aguilar Morales, said the structure of any particular family is irrelevant. Rather, the lives of children in abandonment must be prioritized and turned over to parents who can provide an authentic life of affection and solidarity no matter their gender.

The news follows the court’s nationwide decision in June to allow legal marriage between gay individuals. Though the ruling struck down state bans — gay marriage was only legal in Mexico City until then — it did not affect nationwide adoption laws. The court’s current decision only affects adoptions in Campeche, but may serve as the precedent for the lifting of the ban in other states.

The decision received much praise from the LGBT community but negative criticism from some conservative activists, saying it was a shame that this has been allowed and that it is something unnatural.

The Supreme Court’s decision was almost unanimous, with only Justice Eduardo Medina-Mora — the Mexican ambassador to the United States until March — voting against. 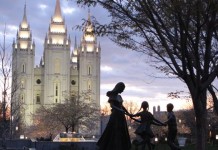