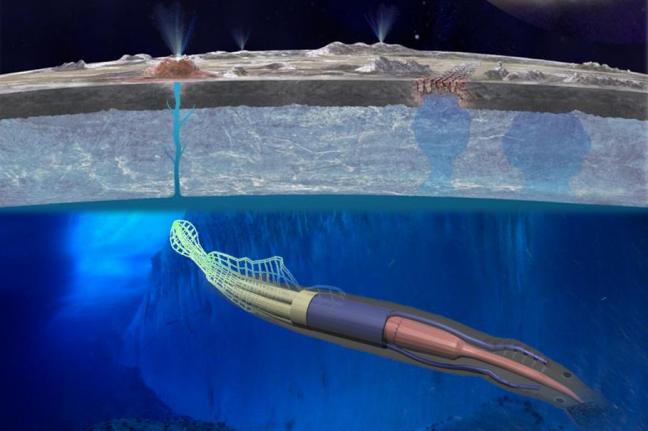 Will a Soft Robot be First to Explore Europa’s Oceans?

ITHACA, N.Y., May 13 (UPI) — Long intrigued by Europa’s icy, water-logged environs, researchers around the world are trying figure out the best way to explore the alien world up close.

Engineers at Cornell University say a giant soft robot is the best bet. This giant, soft robot, which remains only a design, (not yet a prototype), would forgo the dry surface for the moon’s underwater worlds.

The research team is led by Mason Peck, an associate professor of mechanical and aerospace engineering at Cornell. Peck his co-investigator, Rob Shepherd, say the team’s early designs suggest a fish-like robot resembling a lamprey.

As of now, researchers plan to compose the eel-like body of stretchable, electroluminescent skin that can light up the robot’s marine surroundings. It will also be designed to source energy from its environment — harvesting solar power and scavenging for hydrogen and oxygen gas which will be stored in internal chambers and then ignited to propel to the robot through the water.

“This robotic concept is inspired by terrestrial biology, and may help us understand how creatures in an environment like Europa’s ocean could gather energy to sustain life,” Peck said.

If NASA likes their initial designs, the team could be eligible for another $500,000.