SALT LAKE CITY, Utah, Aug. 7, 2017 (Gephardt Daily) — Swastikas for peace! Yeah, that’s not, like, the weirdest slogan ever, but it’s on a T-shirt and selling like crazy.

We’re talking about it on “The Todd and Erin Morning Stream” today.

They’re so desperate for real estate in San Francisco that they’re using a little island in the bay for a new housing development … except, they’ve been storing something there that you would THINK might rule it out, we’ll tell you what on “The Todd and Erin Morning Stream” today.

One of the stars from “Guardians of the Galaxy” just separated from his wife — they were the big love story!- we’ll tell you who.

Also! Two-legged dogs, cannabis towns and a shark eating a camera. Be sure to personal message us with the code word to win dinner for four at Christopher’s Prime Steakhouse and limo service from Executive Transportation. 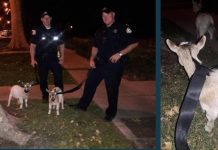