Biden carried Georgia and Arizona en route to defeating Trump, but the committee will shine a light Tuesday on how the former president attempted to subvert the will of the voters in both states in a desperate bid to keep power. The lies, the panel says, led directly to the Jan. 6, 2021 attack on the Capitol.

“We’ll show evidence of the president’s involvement in this scheme. We’ll also show evidence about what his own lawyers came to think about this scheme,” committee member Rep. Adam Schiff, D-Calif., told CNN on Sunday.

“And we’ll show courageous state officials who stood up and said they wouldn’t go along with this plan to either call legislators back into session or decertify the results for Joe Biden.”

During a phone call four days before the Capitol attack, Trump told Raffensberger, a Republican, to “find” him enough votes to overtake Biden in the state. He’d threatened the Georgia secretary of state that if he didn’t comply, he wouldn’t be re-elected and might even face criminal charges.

Raffensperger told Trump that he was wrong in his claims that he won Georgia. He also said that his office’s general counsel, Ryan Germany, refuted claims by Trump that voting machines had been tampered with.

Moss, the Georgia election worker, ultimately filed a defamation lawsuit against the right-wing One America News Network and Trump’s attorney Rudy Giuliani. The suit says that the network aired stories that falsely accused her and another worker of committing ballot fraud to favor Biden in Georgia.

No court challenge or investigation has found any evidence to support Trump’s claims of voter fraud in any state. Trump’s Attorney General William Barr said there was no evidence of fraud and the Homeland Security Department said the 2020 vote was the “most secure election in history.”

Bowers, Arizona’s Republican House speaker, has said that Trump and Giuliani — and even Ginni Thomas, a conservative activist and the wife of Supreme Court Justice Clarence Thomas — had asked him to submit an alternate slate of electors who would go for Trump over Biden during the Electoral College voting process.

At the committee’s last hearing on Thursday, former Vice President Mike Pence‘s attorney Greg Jacob and J. Michael Luttig, a retired federal judge who was an informal adviser to Pence, testified that Trump pressured Pence to count alternative electors, even though they didn’t exist.

Luttig said that had Pence rejected the Electoral College votes for Biden, it “would have been tantamount to a revolution within a constitutional crisis.”

On Sunday, Schiff said the committee still had “several key people we have not interviewed we would like to,” noting that it could still possibly subpoena Pence and Ginni Thomas to appear as part of its investigation.

“We’re not excluding anyone or anything at this point,” Schiff said.

The committee’s fifth public hearing is scheduled for Thursday afternoon. The panel is expected to hold several more hearings before September. 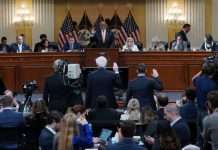