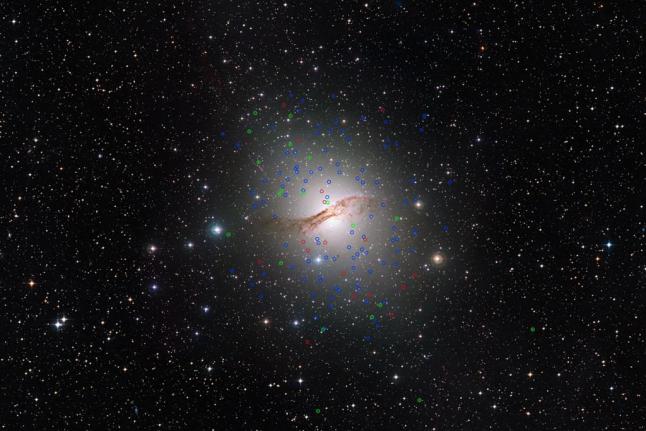 SANTIAGO, Chile, May 13 (UPI) — Globular star clusters are all the same. Or at least that’s what researchers had assumed. But a new survey of the clusters suggests the systems are more diverse that once thought — and that some suggest a darker side.

Globular star clusters are dense concentrations of stars that orbit most galaxies. The spherical clusters exist in the halos of galaxies, and are considered to be some of the oldest stellar structures in the universe. The Milky Way hosts roughly 150 of these ancient clusters.

Recently, astronomers with the European Southern Observatory identified a new class of clusters — dark globular star clusters. As the signifier dark denotes, these clusters feature either large (and unexpected) amounts of dark matter or black holes.

The Milky Way’s 150-strong population of globulars may sound like a lot, but the neighboring elliptical galaxy Centaurus A boasts some 2,000 globular clusters. Using data collected by the Very Large Telescope, at the Paranal Observatory in northern Chile, astronomers analyzed the 2,000 clusters — cataloging their dimensions.

Most, as expected, featured levels of corresponding mass and brightness. The more mass, the brighter a globular could be expected to be. But a few bucked the trend, subbing dark matter for light-emitting material. And for those that appeared to form a new category of dark clusters, the larger the mass, the larger the amount of dark matter.

“Our discovery of star clusters with unexpectedly high masses for the amount of stars they contain hints that there might be multiple families of globular clusters, with differing formation histories,” Thomas Puzia, co-author of the new study on the phenomenon, explained in a press release. “Apparently some star clusters look like, walk like, and smell like run-of-the-mill globulars, but there may quite literally be more to them than meets the eye.”

The new category upsets the traditional understanding of how globulars form. Now, researchers say, the entire concept of (and theories related to) the globular star cluster needs to be re-examined.

“We have stumbled on a new and mysterious class of star cluster!” said lead study author Matt Taylor, an astronomer and PhD student in Chile. “This shows that we still have much to learn about all aspects of globular cluster formation. It’s an important result and we now need to find further examples of dark clusters around other galaxies.”