Fauci, who serves as the president’s chief medical advisor and heads the National Institute of Allergy and Infectious Diseases, said he plans to leave government prior to the end of Biden’s current term, which is done in January of 2025.

“By the time we get to the end of Biden’s first term, I will very likely (retire),” Fauci told CNN.

In a Politico interview published Monday, Fauci said he did not expect to remain in government until coronavirus is eradicated, because he said, “I think we’re going to be living with this for years to come.”

Fauci told CNN’s “At This Hour” that his retirement plans are not finalized, just “that it is extremely unlikely — in fact, for sure — that I am not going to be here beyond January 2025.”

Fauci, 81, said he believes that when he retires, NIAID will transition smoothly to new leadership.

“Everybody in a position of any influence in my institute, I handpick. So it’s something that I’ve been working on now for four decades. So we have a good system in place,” Fauci told CNN’s Kate Bolduan.

“Obviously, you can’t go on forever. I do want to do other things in my career, even though I’m at a rather advanced age. I have the energy and the passion to continue to want to pursue other aspects of my professional career and I’m going to do that some time.” 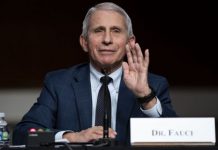