MUNICH, Germany, April 21 (UPI) — In anticipation of its birthday and its 26th year in space, the Hubble Space Telescope has shared a stunning image of NGC 7635, otherwise known as the Bubble Nebula.

The image isn’t actually a single photo, but the combination of four images captured by Hubble’s Wide Field Camera 3. Together, the images form a mosaic rendering the soap-bubble-like cloud of gas in brilliant cosmic color.

The bubble is illuminated by a bright O-class star named SAO 20575. The star is estimated to be between 10 to 20 times the mass of the sun. It is found 8,000 light-years away within the constellation Cassiopeia. The stellar winds produced by SAO 20575 are responsible for the bubble’s formation.

A neighboring giant molecular cloud offers some resistance to the bubble, but the pressure of the stellar winds are too great and the bubble continues to grow.

The Hubble Space Telescope was launched nearly 26 years ago, on April 24, 1990 — a collaborative project between NASA and the European Space Agency. 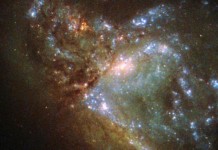