OGDEN, Utah, June 6, 2020 (Gephardt Daily) — Hundreds of people paid their respects Thursday night during a candlelight memorial vigil honoring Ogden Police Officer Nathan Lyday, who died in the line of duty on May 28.

The hour long rolling vigil began at 9 p.m. near 21st Street and Lincoln Avenue, making its way past parts of the city that held special meaning for Officer Lyday, who was born and raised in Ogden.

Area residents lined the route in a show of support for the family of the fallen officer and his fellow officers in the OPD. Police motorcycles and patrol cars, Lyday family members, and Officer Lyday’s police car — draped with the American flag and decorated with flowers — made up part of the procession.

Blue LED candles were distributed as part of the rolling vigil, and many people brought their own candles, as well.

Lyday’s patrol car remains at Lindquist Field, where the rolling vigil ended, and will be there throughout the funeral service on Saturday. Police officers are keeping watch over it.

The following video shows the arrival of the United States Honor Flag at Salt Lake International Airport on Thursday. The U.S. Honor Flag and the Utah Fallen Hero flag, also known as Hero 2, will be presented in honor of Officer Lyday and will be displayed beside his casket.

Nate Lyday had served only 15 months as an Ogden police officer when he was fatally shot as he responded to a domestic violence call on the 300 block of Jackson Avenue.

A woman had called 911, reporting that her husband was threatening to kill her.

When officers arrived at the home, the suspect was on the porch, but ran back inside, slamming the door. Lyday and a parole officer approached the house, and the suspect began firing a gun through the door, fatally striking Officer Lyday, and wounding the parole officer, who survived.

A funeral procession is scheduled for 12:30 p.m. Saturday, after the funeral service. 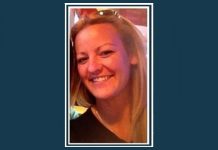 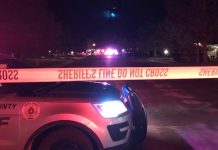