He said it is unclear where the cancer originated and plans to cut his schedule “rather dramatically” to undergo treatment.

Carter spoke calmly as he talked about his diagnosis Thursday morning from the Carter Center in Atlanta and said he was “surprisingly at ease” when he was told by doctors that the cancer had spread to his brain.

Carter said he feels good, with only slight pain.

“I’m perfectly at ease with whatever comes. I’m ready for anything,” he said. “I’m looking forward to a new adventure.”

Carter announced August 12 he has cancer, discovered during surgery to remove a mass in his liver.

“Recent liver surgery revealed that I have cancer that now is in other parts of my body,” he said in a statement posted to the Carter Center website. “I will be rearranging my schedule as necessary so I can undergo treatment by physicians at Emory Healthcare.”

Carter, 90 , is the second-oldest living U.S. president behind George H.W. Bush, who is about four months older. Bush dealt with a broken neck vertebra in July.

Carter’s surgery follows the publication of his book, “A Full Life: Reflections at 90,” which was described by a reviewer as a warm memoir of Carter’s youth alongside an assessment of the issues he tackled as the 39th president of the United States.

In his retirement, Carter has maintained good health and traveled regularly. So far this year he has visited places in the Middle East and South America, although he cut a May trip to Guyana short due to feeling ill.

Tomas Monzon contributed to this report. 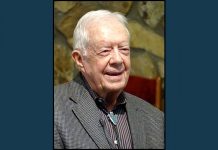