It reads, in full:

We also recognize that under our legal system it is the District Attorney’s job to make difficult determinations regarding the use of deadly force by police officers. The legal standard for determining whether deadly force is justified or not is set by State law and based on Federal precedents. Neither the Council nor the District Attorney sets that standard. However, the Salt Lake City Council believes that we deserve better.

We do not accept these systems as they are. We commit to doing our part to improve our City systems while advocating for changes outside our purview at the State or Federal level that will root out racism, dismantle systemic injustice, and lead the State of Utah in promoting equity and justice for all residents. 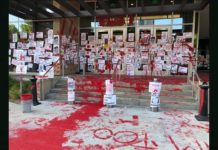