“We had word that there were four people living in the home,” Morris said. “We did a preliminary search and there was one male victim.”

Morris said the man was brought out of the home in critical condition with severe burns and was taken to Intermountain Medical Center, where he was being evaluated.

“We haven’t accounted for the other three individuals. We did a secondary search of the home, and it appears they weren’t home at the time of the fire,” Morris said.

No pets were found in the home, and neighbors told firefighters they didn’t think  any pets were living there.

The Red Cross has been contacted to assist the displaced residents.

The fire was reported shortly before 8:30 p.m., and Morris said crews accomplished the initial knockdown within about six minutes of arriving. The fire was under control within eight minutes, he said. There was no damage to adjacent buildings.

It’s still early in the investigation, and officials don’t yet know how the fire started. Morris said they may be at the scene until Monday morning. A specially trained dog is being brought in to see if it can detect any sign of an accelerant in the home.

Firefighters from South Salt Lake, Murray, Salt Lake City and Unified Fire Authority responded to the scene, and Morris said the crews did a great job of quickly getting the blaze under control and extinguished. 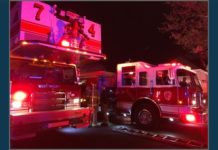 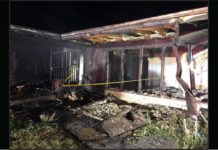 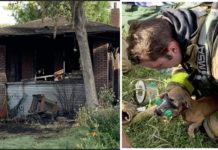