WEST VALLEY CITY, Utah, Feb. 23, 2020 (Gephardt Daily) — A 15-year-old was taken into custody Saturday night after he led police on a brief pursuit in a stolen SUV.

The youth was getting gas at a Maverik station at 5600 West and 5400 South when an officer recognized the vehicle as being stolen, West Valley City Police Lt. Shane Matheson told Gephardt Daily.

The officer requested backup, but the teen drove away before more police arrived, so the officer followed him as he headed east on 5400 South.

Unified Police officers assisted by deploying spikes, which pierced the vehicle’s two passenger-side tires, Matheson said. The teen continued driving at low speed until he reached Robert Frost Elementary School, at 3444 W. 4400 South, where he left the SUV and fled on foot into the neighborhood.

The officer watched the teen run into a backyard and climb onto a roof.

Matheson said that as the teen fled, he was clutching something in his waistband and from the way he was holding it, the officer surmised that he had a gun.

No gun was found on the boy when he was taken into custody, but a handgun that had been stolen out of Draper was found in the backpack the boy had with him, along with a small amount of marijuana, Matheson said. The boy did not brandish the weapon at the officer, he said.

There were no injuries as a result of the arrest or the pursuit — which Matheson said lasted about seven minutes and never topped 50 mph — but the teen complained of feeling “light-headed,” so he was taken to the hospital to get checked out before being transported to the juvenile detention center.

The teen is from West Valley City and was already wanted on a juvenile pickup order. He is not being identified because of his juvenile status.

A juvenile female who was a passenger in the stolen vehicle was not detained. An officer gave the girl a courtesy ride home to her parents, Matheson said. 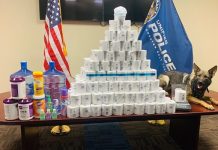 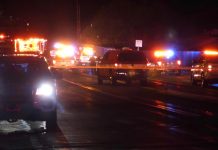 Investigators on scene of officer-involved shooting in Taylorsville